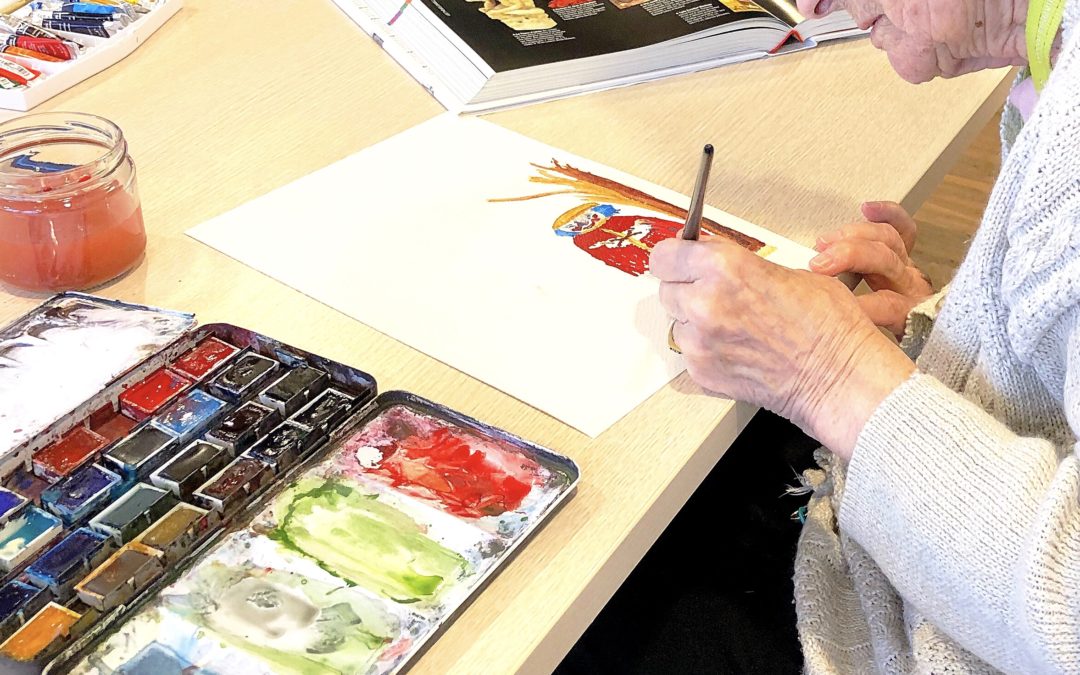 “Cheer cheer cheer” ! ThriveGlobal.com published an article by Sara Lettieri about my artwork workshop with people with dementia 🙂

You can read it here: https://www.thriveglobal.com/stories/20608-drawing-from-the-beauty-inside

But I want to share it with you on my blog! 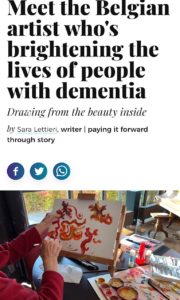 At the front of the room, Marie’s eyes light up as she wields her paintbrush across the canvas. She’s trembling with joy at the masterpiece she’s creating.

Over to her right, Thomas is sitting quietly, painting a detailed Valencian landscape. As usual, he’s had a productive afternoon, drawing from hidden memories of his years working at sea.

These days, Thomas and Marie don’t say much – in fact Thomas doesn’t speak at all anymore – but like most people affected by dementia, they have a lot they want to express.

And with the help of Belgian artist, Barbara Luel, they are able to do that through art.

Every fortnight, Barbara volunteers her time to run an art workshop for people with dementia at the local care home in Leuven, Belgium.

“By making art we reconnect with the identity of the person,” Barbara says.

“The dementia makes memories, passions and talents go away; the art making brings them back for a while.”

Having witnessed her late grandmother living her final years with dementia, and watching the kind, attentive, patient woman she grew up with, slip away, Barbara is passionate about bringing joy to the lives of people touched by the disease.

“It’s like she died twice – the first time when she didn’t recognize me anymore,” reflects Barbara.

“My grandmother ended her life in a ‘care’ home where the care didn’t extend much past washing and feeding. Every time I went to visit, I’d find her tied up in a wheel chair, parked in front of the television.

“It was a long time before we realized she had dementia and that a lot of her unusual behavior was due to her disease. Looking back, we hadn’t been very kind to her and that hurts.

“If I knew she was sick, I would have been more patient. I think that makes me a kinder and more generous person today.”

It was years after her grandmother’s death, at a government-run communication for dementia program that Barbara was inspired to do more. Here she met artist Bert Vervaet, who soon opened her eyes to a new way of caring, communicating and making art.

“Bert’s developed this great art workshop in a care home near his place and he goes there two days a week to paint and draw with the residents.

“For a couple of years I helped at Bert’s workshop and he showed me that art really is a universal language.

“Seeing this different way of caring, I was really shocked by the memory of how my grandmother ended her life in her care home.”

It was this realization that motivated Barbara to start the Art for Dementia Project and her own workshop.

Most of the people who are brought into the workshops are those who don’t have any regular visitors or who look to be struggling.

“We ask if they want to do some art and most of the time they say yes.

“When they enter the room, they’re usually quite restless and often don’t remember why they’re there. It can take some time to acclimatize to the new environment, so we sit and chat until they’re more comfortable.

“Sometimes we show them books with images and talk about the beauty in the artwork. We also ask about their past or their favorite things. Then we present them the color pencils, the paint, the brushes, the paper or canvas, and we show them how to start.

“And then magic happens: they start making art.”

A 2016 review of studies** on the impact of literary, performing and visual arts on cognition in people with dementia, found that “arts-based activities had a positive impact on cognitive processes, in particular on attention, stimulation of memories, enhanced communication and engagement with creative activities”.

This positive impact is evident time and time again in Barbara’s workshops. She says that by focusing on what people with dementia still can do, instead of what they can’t do anymore, they gain confidence.”

“Sometimes they paint their feelings or their forgotten memories, and they relax and find some rest and joy.

“Their eyes light up and many start talking about what they’re painting and their life experiences.

“Last week a patient was telling me how this art just had to come ‘out of her’ and was ‘trembling inside her’. She was very joyful while saying that, and said she couldn’t believe she would still be painting.

“Some can draw very well, and others create more abstract art, but what they make is always beautiful because it comes from inside them. So there’s a certain power in it.

“It’s like when we were children, we would draw without thinking if we can or can’t. But as we grew up, we kind of forgot, or other people convinced us we’re no good at making art.”

This notion of being told you’re not good at art is something Barbara knows all about.

An architect by trade, Barbara put her art on hold to fulfill her parents’ wishes for her to study at university.

“My parents told me that being an artist isn’t a ‘real job’ and I wouldn’t be able to make a living out of it. I chose architecture studies because I thought that way at least I could continue drawing.

“After my studies I had so much stress in my job that I stopped making art for about 15 years.

“I eventually found a job that I loved and at some point tried to make art again but my inner critic took over, telling me what I was making was amateur. That all changed when I met my husband, who really encouraged me.”

When you look at the quality of Barbara’s artwork, it’s hard to believe she’s talking about herself. But undoubtedly it’s this humility and self-awareness that drives her work helping people with dementia.

“This work brings me warmth, inspiration and human connection with great people.

“It’s taught me to see the disease without fear and accept vulnerability in myself and in other people. Dementia used to scare me and make me uncomfortable because it’s seen as losing control, but I’ve learned to let go of that – that’s just our way of trying to stay in control.

“When you let go you get access to a whole new world – you can actually have a lot of fun and do nice things; sometimes even connect to your inner child.

In 2018, Barbara plans to continue volunteering and hopes to inspire others to do the same.

“I’m currently creating some worksheets for carers, to give them the tools to start their own workshop – either at a care home or in their own home.”

Above all Barbara wants everyone to see that people with dementia are still human beings, with feelings and an identity.

“There is still a big taboo about the illness and that makes people uncomfortable – that’s a pity. Society is growing older and it’s a disease that everyone will be confronted with, so we need to get comfortable with it.

“I want people to know that dementia doesn’t have to be pain alone, there can be joy as well.

“And when you bring attention and beauty in a creative space, you get art in return.”

*Marie and Thomas are made up names